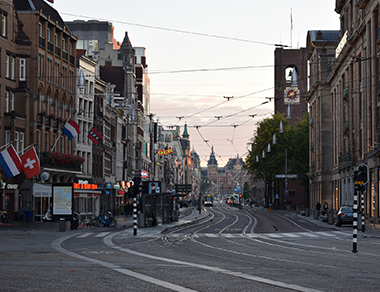 The desire to go green is accelerating all the time. Propelled into the mainstream by eco-conscious millennials and a growing global awareness about the dangers of climate change, the green revolution is happening all around us.

This central European nation may not be the first place which springs to mind when thinking of green amenities but the capital Ljubljana is a shining success story. Named the European Green Capital 2016, the city famous for its medieval castle and historic centre is actually a pioneer in cutting-edge environmentally friendly innovations.

Electric-powered Kavalirs, mini taxi buses which navigate the historical centre, are free to use and designed specifically to improve transport access for the elderly and mobility-impaired citizens. Meanwhile, it is also the first city in Europe to offer electric attachments for wheelchair users visiting the city.

Its city centre is traffic free as well with car users made to use designated underground car parks on the edge of the centre, while its various bike rental schemes are helping keep carbon emissions low in leafy Ljubljana.

We know, Amsterdam and bicycles are as symbolic as The Thames is to London, but environmentally friendly transport options in the Dutch capital are moving beyond the trusty two-wheel push bike.

The city is aiming for an emission-free public transport system by 2025 and is in the process of rolling out new electric buses across its network. It recently acquired 31 e-buses and that is likely to increase to 100 by 2020 in a move which could see the city save more than 500 tonnes of CO2 emission per year. What’s more, Amsterdam has one of the highest number of electric car charging points in Europe, with over 300 stations spread across the city.

And with e-scooter start-ups such as Felyx and Dott increasing the options of two-wheel transport in the city, the bicycle’s domination of Amsterdam could be about to change.

The Spanish city is perhaps not the most green city for transport in the world but it is increasingly adding to its green credentials. Its bus fleet is gearing up for an electric revolution and more than 20 buses will be powered by electricity in 2020 and this is set to hit 100 by 2024.

But it is the new craze for electric scooters that is sweeping across the Catalan city - and much of Europe for that matter - which makes Barcelona a worthy inclusion to the list.

Vespa style scooter company YEGO - and its rivals eCooltra and Scoot - are among those leading the way with fleets of electric two-wheel vehicles. Rented on a per minute basis and accessible across the city, the YEGO e-scooters use only 2% of the emissions of a car and are also improving the green footprints of Bordeaux and Valencia.

Routinely praised for its liveability and active approach to environmentalism, the Danish capital is also a leader in advocating for environmentally friendly transport solutions.

The intrinsic eco outlook was cemented in 2016 when the number of bikes overtook the number of cars on the city’s streets for the first time with more than 260,000 cyclists now pedaling through the city.

And even the vehicles that do remain in the city are increasingly turning green. By the end of this year, all buses operating in Copenhagen will have adopted electric engines and it is set to become the first CO2-neutral city by 2025.

It’s clear that the world is becoming ever-more green and the way we navigate our cities is changing for the better. Supporting this is at the heart of what we do at Zapp with our i300 electric scooter which combats emission levels but does not compromise on performance. Find out more about Zapp’s electric scooters here.